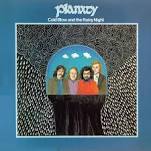 This tune title, “The £42 Cheque,” was used by Planxty on their LP Cold Blow and A Rainy Night (1974), but it has also been called “the four pound check,” and “the fourty-five pound check.”  Though some people argue that it’s an old piece, and the different amounts given to the check are the result of inflation, this seems a spurious assumption. According to Dónal Lunny (b. March 10, 1947) the tune was written by Johnny Moynihan (b. October 29, 1946) in the early 1970s. The story is that Johnny had met an agreeable woman early one day, and they had spent the rest of it absorbing Ireland’s finest. When evening came round, as will happen,

they ran out of money.  Scrounging around in her purse the women discovered a check for, you guessed it, fourty-two pounds.  While she went into a bank at the corner of O’Connell St. and Abbey St. he began playing  “this hybrid of a polka” on some instrument in the van.  She cashed the check, thereby becoming an even more agreeable woman, and they continued on their fermented esprit . . .  oh, and then later decided to call the tune “The £42 Cheque” (Leagues O’Toole, The Humours of Planxty, London: Hodder & Stoughton, 2007, p. 194).