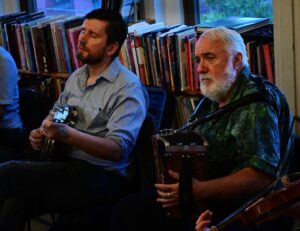 This Jig was penned by my friend Mike Dugger, and has been recorded by a number of different folks.  About this tune Mike writes “I wrote the tune in 1997 in my garage when I lived on 10580 Gillette Street, in Overland Park, Kansas. I don’t know where it came from but I had just met Rick Cunningham from Hoover, Alabama at the Swannanoa Gathering and we became, and still are, fast friends. I played it the following year at the Gathering on stage with Roger Landes and Zan McLeod as an opener for the teacher concert and it was a huge hit. It’s currently played a lot in Texas and I have heard from a player in Japan some years ago, that its played over there as well. It’s been recorded by myself, Ken and Peggy Fleming, with Kevin Alewine in Dallas, Texas and a band called Roarin’ Mary out of Virginia.”  Thanks for the tune, Mike!!