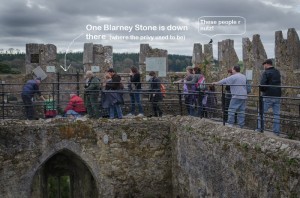 Kissing that Blarney Stone in 2011

“Blarney Pilgrim” appears as tune #1099 in O’Neill’s 1850 (1903). There are numbers of variations of this tune at sessions, and quite a bit of confusion over its tonal center – which is really of concern only to those backing/accompanying the tune. The melody was especially popular at sessions in the 1970s, and though a few people may now think of it as somewhat tatty, it is still popular at sessions and so it’s a good idea to get a firm hold of it. While some people appear to treat the tune as in G throughout, to my ear it sounds right to think of the A-part and C-part in Dmix and the B-part in G – since the tonal center of the A-part and C-part is D (both using a hexatonic scale), while the tonal center of the B-part is G (using a pentatonic scale). One could, of course accompany it in G the first time through and then “mix it up.” 😉 Like some other ambiguous modal tunes there are, of course, different ways to accompany this tune depending on the ear of the accompanist.  Still, the way preferred in KC area sessions seems to be to treat the A-part and B-part as in G, and C-part in Dmix.  So, that’s how I’d do it for the melody players around here if I was a newcomer, or if there was another accompanist in ear-shot.  When I do play accompaniment, I tend to try to sit far enough away from other accompanists (unless I know they have a fast ear), and then play as I like.

As for the title, many places in Ireland claim to have the original Blarney Stone. Blarney Castle, in the town of Blarney, County Cork (said to be the ancestral seat of the great kings of Munster, the McCarthy’s), is probably the most visited for this reason, and its blarney stone, embedded in a high outer wall of the castle, is often kissed. Osculating the blarney stone is held to confer an aptitude for eloquent discourse. I’m not so sanguine, though I used to be very shy up until the time one of my Irish girlfriends began to sing over and over to me “the nearest Blarney Stone I know is underneath my nose.”