The title of this jig, “When Sick is it Tea You Want?,” is rhetorical question.  It is meant to elicit a negative response.  What, then, does one want when sick if not tea?  This tune is in Francis O’Neill and James O’Neill, Music of Ireland (1903) – which is commonly called “O’Neill’s 1850” because it has about 1850 tunes in it.  In 1900, home remedies administered by one’s Móraí or Gran (or Nana, esp. in England) always included whiskey, or bourbon, or brandy. Whatever their medicinal value they did have the advantage of inducing a bairn’s slumber. Before playing this tune, the Donegal whistle player and man of many tune-stories[1] 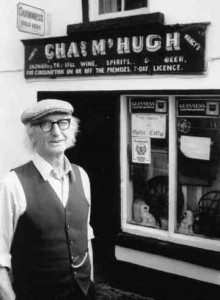 There’s a well-known Leitrim piper who was once offered a morning cup of tea by the lady of the house, whereupon he played this tune and afterward said “that’s called ‘When sick is it tea that you want?’” She got the message, and brought him a whiskey straight away.

Packie lived, worked, and played the folk scene in London during the 1960s and 70s.  Now, if you’re so inclined, and opposed to rhetorical questions, you may either regard “tea” as a sociable euphemism, or think of tea as actual medicine (like Prashanti de Jager).

[1] In addition to his autobiography Recollections of a Donegal Man (1989), and his tune book A Dossen of Heather (1998), there’s a collection of stories he commonly tells, My Friend Flanagan: tall tales told by Packie Manus Byrne (1996).