There are a few tunes that go by “Toss the Feathers.” This one, in Eaeol, is popular.  The other, in Dmix, is popular too.  This one is identified by Stanford and Petrie as a Clare reel. Brendan Breathnach says it is known in County Tipperary as “Thresh the Feathers” and “The Humours of Ballagh” (1976). The title is a pretty obvious euphemism.  Yet, James Joyce supposedly thought the title referred to feathers in a headdress or helmet– but that’s probably apocryphal.

O’Neill (1913) relates a grand story featuring this tune as told by the famous late-19th century uilleann piper Turlogh McSweeney and called “The Donegal Piper” — not to be confused with the Neil A. Duddy recordings entitled The Donegal Piper (1961).  Turlogh McSweeney was himself well-known as “The Donegal Piper,” and in the latter 19th century made a reputation for himself as one of the best pipers of Donegal and surrounds. Though also known as a taciturn and reserved individual, he relaxed enough on one visit to Chicago, where he was to perform at the World’s Columbian Exposition in Chicago in 1893, and told two musician friends of Francis O’Neill the story of how he came by his talent. McSweeney put forth that he was actually not much of a player in his younger days, but that he was anxious to improve. Despairing of other means of attaining his goal, he thought to appeal to the fairies who lived at a hill-top rath nearby. On a moonlight night, he summoned his courage, buckled on his pipes and made his way to the fort. O’Neill (1913) quotes him:

Well, as I was saying, when I got to the center of the Plasog, as near as I could tell, you may be sure I wasn’t any too comfortable. Anyhow, I addressed myself to the king of the fairies saying: “I’m Turlogh McSweeney, the piper of Gwedore, and I hope you will pardon my boldness for coming to ask your majesty to play a chune on the pipes for me, and I’ll return the compliment and play for you.” Yerra man, like a shot out of a gun, the words were hardly out of my mouth when the grandest music of many pipers, let alone one, playing all together, filled my ears; and that wasn’t all for lo and behold you, what should I see but scores of little fairies or luricauns, wearing red caps, neatly footing it, as if for a wager. Believe me, I was so overcome with fright at such a strange and unexpected sight that I ran for the bare life, my pipes hanging to me and dropping off piece and joint along the way; and by the time I reached home, the dickens a bit of my whole set of pipes was left to me but the bellows and bag, and they couldn’t let go, as they were strapped round my waist. Picture to yourselves the kind of a night I spent after what happened. Anyway, by sun-up in the morning I ventured out and started to try and pick up the disjointed sections of my pipes, as I knew well enough the route I ran. My luck relieved my misgivings when I found the last missing part, which had dropped off at the very entrance to the rath or fort when I ran away. I lost no time in putting the now complete instrument in order, and to keep my word and fulfil my promise made to the king of the fairies the night before, I struck up “The Wild Irishman,” my favorite reel. Words can’t express my astonishment and delight when I found I could play as well as the best of them. And that, gentlemen, is how I came to be the best Union piper of my day in that part of the country.

Later McSweeney had another story, this one featuring our “Toss the Feathers”:

. . . when I was living alone in the little cabin after my mother died— God rest her soul—there came to the door in the dusk of the evening a stranger and nothing less than a piper, by the way, who with a ‘God save all here,’ introduced himself as was customary. I invited him in, of course, and after making himself at aise he says, ‘Would you like to hear a ‘chune’ on the pipes?’ ‘I would that,’ said I, for you know a piper and his music are always welcome in an Irish home. Taking his pipes out of the bag, he laid them on the bed beside him, and what do you think but without anyone laying a finger on them, they struck up “Toss the Feathers” in a way that would make a cripple get up and dance. After a while, when they stopped, he says, ‘Will you play a ‘chune’ for me now?’ I said I would and welcome, pulling the blanket off my pipes that were hid under the bedclothes, to keep the reeds from drying out. ‘Give us “Seaghan ua Duibhir an Gleanna” says I to the pipes, and when they commenced to play, the mysterious stranger, who no doubt was a fairy, remarked ‘Ah! Mac, I see you are one of us.’ With that both sets of pipes played half a dozen ‘chunes’ together. When they had enough of it, the fairy picked up his pipes and put them in the green bag again. If I had any doubts about him before, I had none at all when he said familiarly, ‘Mac, I’m delighted with my visit here this evening, and as I have several other calls to make I’ll have to be after bidding you good night, but if I should happen to be passing by this way again, I’ll be sure to drop in.’

Now, you might not know, but the World’s Columbian Exposition in Chicago in 1893 was part of the 1893 World’s Fair.  McSweeney stayed with a good friend of Francis O’Neill (1848-1936), one James Early (1840-1914), who opened his home in Chicago to visiting and local Irish musicians. The house became the main meeting place for Irish musicians during the 1893 World’s Fair.  Turlogh McSweeney lived at Early’s residence during the weekends while performing at the “Irish Village” at the Fair.  If you want to read more of the McSweeney’s story, it is currently available in a google book of O’Neill’s Irish Minstrels and Musicians: With Numerous Dissertations on Related Subjects (1913). You can read much more about McSweeney too, or just read “Inspired by the Faries.”

As for the the title of our tune, it appears in a list of tunes in the repertoire of Philip Goodman, the last professional and traditional piper in Farney, Louth, which he brought to the Feis Ceoil in Belfast in 1898 (Breathnach, 1997).

For the ABC click Toss the Feathers in Edor

Toss the Feathers (Eaeol), the dots 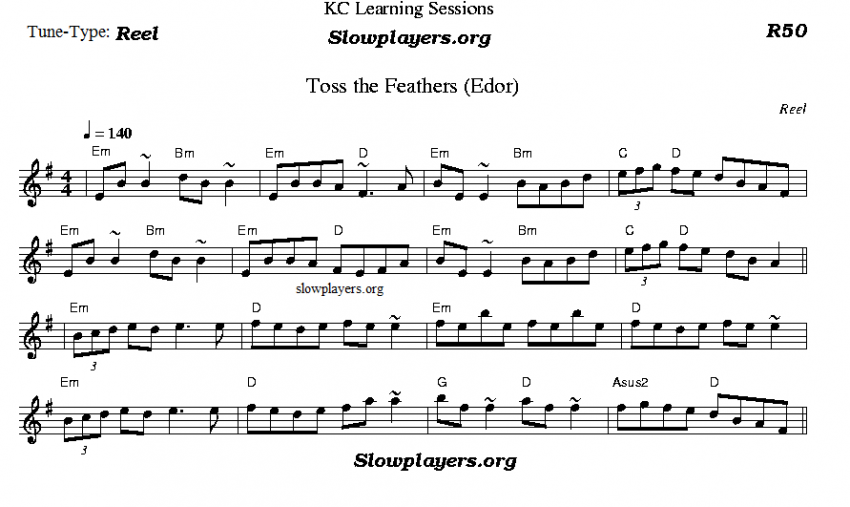