This hornpipe is on De Dannan’s CD Hibernian Rhapsody (1996), the second of two tunes on track 10 “New Century” and “The Wonder,” collectively called “George Ross’ Horn Pipes.”  This tune was recorded by the Wexford accordionist George Ross in the 1950s (which is apparently where members of De Dannan picked it up), but it is most often attributed to James Hill (c. 1811-1853), the “Paganini of hornpipes,” publican, and fiddler from Newcastle, Northumberland, who is also commonly said to have composed “Rights of Man,” “Navvy on the Line,” “Sailor’s Hornpipe,” and numerous others. On the Danú CD The Road Less Traveled (2003) our hornpipe here is on track 10, and paired with “The Impish Hornpipe,” a Danú original. Now, just for clarity, there is also a tune called “The Wonder” on concertina player Father Charles Coen’s album Father Charlie (1979) as the second of two hornpipes in the set “The Echo/The Wonder.”  However, the tune on Father Charlie is a different hornpipe, and as far as I can tell is unique to that album.  Our hornpipe “The Wonder” is #1604 in O’Neill’s 1850 (1903) but there entitled “Coey’s Hornpipe,” and it’s in Ryan’s Mammoth Collection (1883) listed as “Tammany Ring.”

The Wonder, the dots 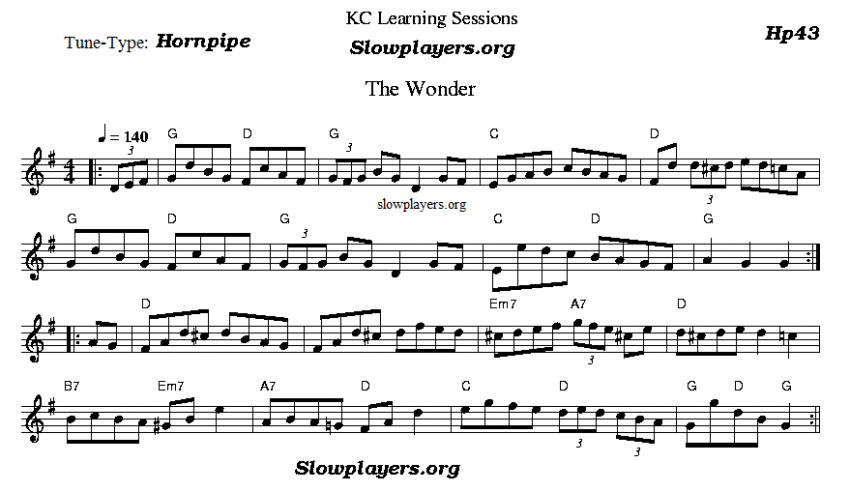