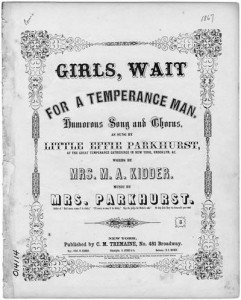 off like a few others, and doesn’t really distinguish itself until the third measure, where it drops to the relative minor.  The beginning note, G, can be held, or rolled, or tripleted as you see fit. The triplets are more common in Irish sessions, and you’ll find it has a different pulse.  That is, to make it sound Irish rather than American you’ll need to play it with more bounce, which is one way of describing the difference.  Irish music will give more time to the first and third beats of a reel, so it is more hilly.  With the old-time and bluegrass the time given to each beat is more evened out, so it sounds flatter.

Just as an aside, “Temperance” is actually synonym for “moderation,” which is NOT what teetotalers wanted when it came to any form of alcohol consumption.  Nonetheless, the idea of temperance, when it was associated with alcohol in the very popular Benjamin Rush pamphlet “The Effects of Ardent Spirits Upon Man” (1805), took on the connotation of abstinence — and despite its common use “total abstinence” really is redundant. In short, Rush did to “temperance” what was long ago done to “terrific,” what George Ade and others did to “bad” in the 1890s (which Michael Jackson simply copied), and what skate-boarders are doing to “sick,” i.e. giving it an opposite meaning. The view that was put forward by Rush to advance this immoderate position was that abstinence from alcohol was part of a “temperate life,” which sounds a lot like saying that the ancient Greek adage “moderation in all things” really means “self-denial in all things.”  For clarity, the ancient Greeks held that moderation is the combination of self-control and wisdom — wisdom for them is, in essence, the ability to make practical choices that turn out well for oneself and others.  Thus, moderation involves setting limits on one’s pleasures, and then being able to identify and adhere to those limits in the practice of life.  To completely deny oneself the pleasure would wholly remove the need for (and practice of) wisdom, and so could not improve the self.  However, as in many things, you will find people who will use reasonable language to advocate unreasonable things. By the way, Benjamin Rush was a Philadelphia physician.  His works are reprinted in philosopher Dagobert D. Runes’ The Selected Writings of Benjamin Rush (New York: Philosophical Library, 1947). 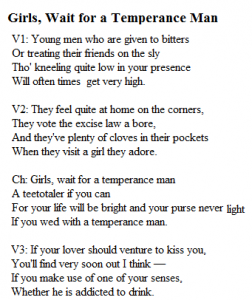 Wait for a Temperance Man

In the nineteenth and twentieth centuries songs and tunes were part of the propaganda of the Temperance Movement.”  Songs of pathos were common, such as “Father’s a Drunkard and Mother is Dead” (1866), and “Girls, Wait for a Temperance Man” (1867), see lyrics, left.

The origin of the word “teetotaler” apparently goes back to an 1833 debate on abstinence (from alcohol), when Richard Turner while somewhat intoxicated, advocated making no distinction between spirits and beer when discussing abstinence from alcohol. He used what was then a common popular phrase “Capital ‘T’ total” in emphasizing his position, and in the process converted himself and others into “teetotalers.”  He did not advocate tea as an alternative to alcohol, nor did he stutter (which would have more likely resulted in the phrase “tuh-totalers”). That is, the “tee” tacked onto the front of “total” was often used for giving emphasis to a word, like saying “This is capital ‘D’ delicious,” which is what linguists redundantly call “reduplication.”

Oh, and about the tune . . . um it’s enjoyable, straightforward, and I like to follow it with a tall glass of beer.