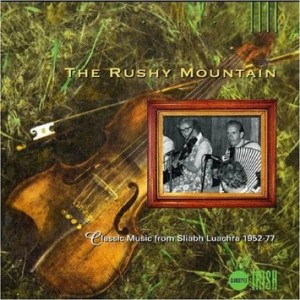 I learned this slide as “The Brosna,” as have many others.  However, many years ago I learned another slide called “The Brosna,” and then came to find still other slides called “The Brosna.” The fact that there are many tunes by this name is probably due to the playing of the Brosna Céili Band from North Kerry in the Sliabh Luachra region where slides are very popular — the band was named after the town of Brosna (Brahs-nach) founded in 1837. Then there are the three slides called simply “The Brosna Slides” and associated with Dónal O’Connor’s recording on Rushy Mountain (2004).  They are “The Brosna Slide #1 > Scartaglen Slide  > Padraig O’Keeffe’s Favourite” — at least this is what they are sometimes called — and each of them has been called “The Brosna Slide.”  In short, there is just no telling what someone might mean when calling a tune “The Brosna Slide,” at least not until you hear it.  As our tune here is also known as “The Lonesome Road to Dingle” I have recently been calling it that, but this is also confusing as there is a polka with this name too!  Still, I am posting this as “Brosna Slide #1” since plenty of people know it by the name I first learned.  It is a Sliabh Luachra (schleave lewkra) slide, which is a popular place for slides and polkas to habitate.  Sliabh Luachra, meaning “Mountain of Rushes,” is a mountainous region which was once an uninhabited marshy area of the old Kingdom of Luachra.  The boarders are not clearly defined, but it is at the intersection of three counties (Cork, Kerry, and Limerick) though often more simply described as along the Cork/Kerry border. It is renowned for its musical style and for producing some of the great (southern) Irish players.