As I mention now and then, tunes named after people usually indicate simply that the person named was fond of playing the tune. At times, however, it is an accurate attribution.  I believe this polka was composed by the prolific composer and fiddle player Sean Ryan (1919-1985) from Nenagh, co. Tipperary, and first cousin of Paddy O’Brien (1922-1991) also of Nenagh, co. Tipperary.  Ryan composed well over two-hundred and fifty tunes before passing in 1985.  He composed many popular session tunes, in addition to this one, including “Sean Ryan’s Jig” (a.k.a. “The Castle”), “The Nightingale,” “The Road to Rio” (a.k.a., “The Reel of Rio”), and “The Glen of Ahlerlow” (a.k.a., “Lafferty’s”).

This polka is also called “John Ryan’s” by anglophiles and “Sean Ryan’s” by everyone else.  I’ve actually heard some silly people disagree about these names.  There are many more important things to argue about, such as who’s turn it is to buy the next round, or whether a bit of Trazz here and there is worth a quizzical look from the pure-drop contingent.  So, just to be clear,“Sean” is the Irish name, and the man was Irish. While the English prefer “John” and in Spain they say “Juan,” our man is from Ireland. Why is there confusion? Well, on the other hand, and just to be fair, there’s quite a bit in the politics of names.  While it might not seem so germane to many on the East side of the pond, that would be an oversight that just bit of reflection on U.S. history might succeed in rectifying.  I suppose it all depends on how aware one is of cultural environs.

Still, this polka is also called the “Armagh Polka,” and “The Forty Pound Float,” but not by anyone around here that I know.  I did go to a session once where someone called it “The Dum Dum Tune.” This is probably because the first two notes in the first, third, and fifth measures are usually given special attention by rhythm players. Now, they might, of course, have been saying “The dumb, dumb tune” — and they were looking at me — but I prefer to interpret it the other way.  Some say that it is unknown who wrote this tune, and suggest that thinking Sean Ryan is the composer is mere speculation.  I’m now obviously leaning toward the opposite view.

Our tune here also shows up in the movie “Titanic,” the ahistorical but oh-so-realistic one with Leonardo Dicaprio. 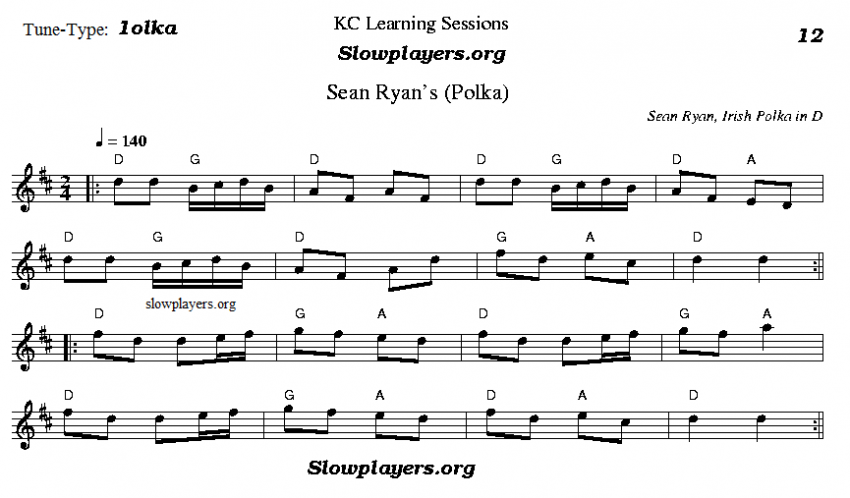