Riding on a Donkey (G)

This simple polka, “Riding on a Donkey” or “Donkey Riding,” is a good for beginning players, and for set dancing.  It is #1000 in O’Neill’s 1001 (1907), and called there “The High Caul Cap.” Though the setting here is in G, you will also find it played in A and D, as well as in Aeolian and Dorian modes.  In addition to being played as a polka, the melody is also played as a sea shanty (Stan Hugill, Shanties from the Seven Seas), and a children’s playground song. It has many names and some are wholly dependent on the key/mode in which it’s played. Some alternative names are “An Caip Cul-Ard,” “Highland Laddie,” “Clear The Way,” “Little Yellow Goat,” “Dundee Whaler,” and “Kiss Me Lady.” It’s a very old tune, dating at least to the seventeenth century, and has been all over the world.  It is played for Morris Dancing, and was a Highland regimental quickstep march. 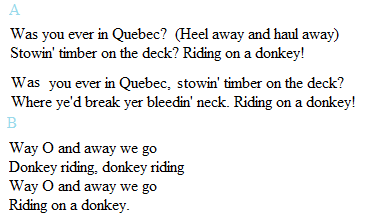 Though the lyrics might seem odd pretty odd at first glance, since by the title you’re apt to think about someone astride on an Ass (Equus africanus asinus).  It will help to know that the sailing term “donkey” refers to a type of winch (not wench!) run by a one cylinder steam engine which was used to lift and move cargo on and off the deck.  Briefly, the donkey was invented in the late 1790s or early 1880s.  This steam-punk contraption made the back-breaking work of hauling and loading the ship much easier, though due to the greater weights being hoisted it was also much more dangerous.  Still, it enchanted some sailors like a siren (the mythic femme fatale, not the tornado-warning kind).  The phrase “to go donkey riding” quickly became a synonym for “going to sea,” and sailors would sing to keep the work steady and, in fact, safer — another example of the importance of embodying a tune.

The Newfoundland group Great Big Sea has a version on their CD “Play” (1997).  Most ceilí groups play a medley of tunes, sometimes starting and ending with “Donkey Riding,” but calling it “The High Cauled Cap.” Ceili musicians playing tunes over and over for a dance know that it can get very tedious. Button accordionist Billy McComiskey had a solution: while playing for a ceili dance in Washington, D.C. he roared out “circle of fifths!” to the musicians and then proceeded to play this tune through the circle of fifths.  I don’t know how far around he made it, but that’s an impressive feat nonetheless.

Riding on a Donkey, slow tempo

This article was posted in Polka, Slow Session, Tune, Tune Comment. Bookmark the permalink. Follow comments with the RSS feed for this post.Post a Comment or leave a trackback: Trackback URL.