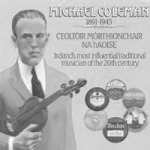 “Killavil”  is a (double) jig from co. Sligo. Killavil is a parish south of Sligo, and the birthplace of the great twentieth century Irish fiddler Michael Coleman (1891-1945).  The name is probably an endocentric compound (or perhaps just a copulative compound) of “cill” (church) and “abhaile” (home, or lit. homeward), and so means something like “Home-Church” — meaning the central church of the area.  The phrase “Slán abhaile” appears on signs throughout Ireland, meaning “Safe Home” (i.e., Drive Safely). The name “Killavil” (again, Cill Abhaile in Irish) is pronounced either kill-AW-vul or kill-AH-vul, rather than KILL-a-vul — though in the States it seems the latter is how it’s often said.  Now, it’s reputed that when the co. Mayo fiddle and flute player Brendan Tonra (b. 1935) and the great Killavil fiddler Fred Finn (1919-1986) — perhaps the most significant Sligo fiddle-player of the post-Coleman era — were at a session in Killavil one evening they were asked the name of the tune they just played, but because neither had a ready name for it they just named it after the parish.  After his death the town erected a monument to honour Fred Finn, which stands outside the Killavil church (bottom pics).  Brendan Tonra, who emigrated to Boston over forty years ago, can be watched performing one of his many compositions, this one entitled “Margaret and John’s” (Oct. 2013).

If you want the ABC for this tune, click Killavil