The hornpipe “Harvest Home” is also called “The Cork Hornpipe” by people from cork, and called “Baile an Fhómhair” by people who prefer its Irish name.  The tune was known in the States in the 1840s.  It’s probably more fun to play than to listen to.  It requires some work to make the melody flow smoothly — and it’s pretty easy to have it speed up each run through, which is undesirable.  The name “Harvest Home” refers to the place where people would gather to dance, play music, tell stories, and sing songs after harvesting.  They would do this at the close of the harvest season, and some dark evenings – during the summer and fall work would continue through the night if the moon was bright enough. Later, the term “a harvest home” began to refer to any rural community dance. This is also thought to be either a Scottish or English tune, and appears on the CD Borders: Songs and Dances of the Scottish-English Border (1960).  In Ciaran Carson’s Last Night’s Fun (1996) he writes that while playing outside one late-summer night on the Leitrim/Fermanagh border someone called for “Harvest Home,” and two men from different locations in the crowd stepped out into the open space and begin to dance: 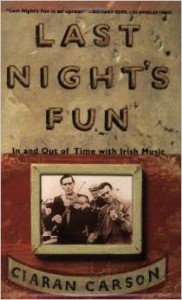 Their hands accompany the dance in little wristy arcane movements, thumbs alternating with their digits. Their feet are hardly off the ground as they heel and toe and tap, till it seems there is a skim of twilight shimmering between their boot-soles and the black wet tarmac. Loose change jingles in their pockets as they waver gravely in the pre-determined and formal quarter-bows, catching one another’s little fingers on occasions, sometimes going for a full hand-clasp, instantly and rhythmically released. They doppelgänger one another. Nods and winks are witnessed as they undergo the subtle dramas of the ceili house. They reinvent the past and all their past encounters; then the pattern comes to its conclusion. Four feet stand on terra firma for one instant, then they break apart and take the gait of normal human beings. Everyone’s relaxed now.  (111)