“Exile of Erin” was composed by banjoista Anthony “Sully” Sullivan, who plays the banjo with a “thimble” (actually, a piece of PVC pipe), and taught that trick to our own Dave Agee. Sully’s tunes have been recorded by Martin Hayes & Dennis Cahill, Lúnasa, Michael McGoldrick, Danú, Liz Carrol, Natalie MacMaster, and many others. Though he’s not as widely known as some, his tunes are often played in sessions. Probably the best known of his compositions are: “The Roaring Barmaid,” “Exile of Erin,” and “The Butlers of Glen Avenue” — though some people assert that the latter was written by Christy Barry, and call it “Christy Barry’s Jig,” that is based on an erroneous provenance. Tony Sullivan is the composer and holds the copyright. He also has a number of excellent tune books including Sully’s Irish Banjo Book, vol. 1 (1979/2010), Sully’s Irish Banjo Book, vol. 2 (1980), and Sully’s Irish Music Book (1979/2005) which has 100 Irish tunes, including 33 original compositions.  There are also Sully’s Irish Music Session Book #2 (1980), and Sully’s Irish Music Session Book #3 (1981), neither of which has been republished  yet as far as I know.  The former band “Roaring Mary” (w/ Paddy League on bodhrán) used to play the set “The Tempest/Exile of Erin/Dinkey Dorian’s” and recorded on their only CD Roaring Mary: Traditional Irish Music (1999) – and their first track was “Alabama Rick’s” written by Mike Dugger.  Now “Exile of Erin” goes pretty low at the end of the A part, and that will be a problem for flute, whistle, and pipe players. I suggest learning to play the same notes an octave higher, and I have the dots for that below the original version.

As for the name “Exile of Erin,” Sully writes in an email to Dave Agee that he shared with me:

It is the name of a pub in (central) Manchester. A very small, old pub that we had sessions in –1971 to 74. It was then closed down by the large brewery that owned it – BASS-CHARRINGTON. But they did nothing with it and just left the building locked up and unused for over 30 years before they finally pulled it down. I have a photo of it (probably the only one in existence) and I will publish it on YOUTUBE sometime soon. We had memorable times in that pub – during the time of discovery of our great Irish music, and many legendary players played in it. The routine on Friday & Saturday night went like this (for me): 100 yards away was another similar sized and unmodernised Irish pub THE RED BULL. There,two musicians had a “gig” – Noel Owens and Joe Farragher (accordion & fiddle). I would go there to play along with them and maybe learn something. That gig finished at11pm. Then I would go to The Exile and play until very late – maybe 5am. You must realise this was completely illegal as all pubs where supposed to close at 11.15pm.
Yours sincerely,
Sully 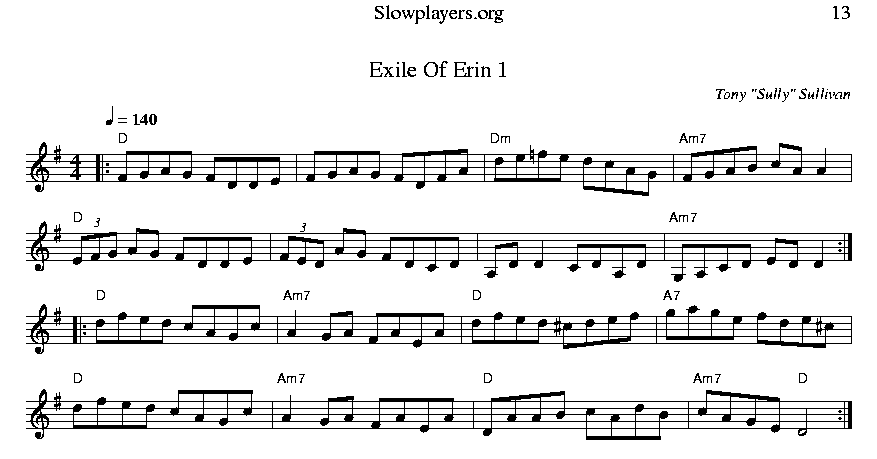 Exile of Erin for whistle, flute, and pipes 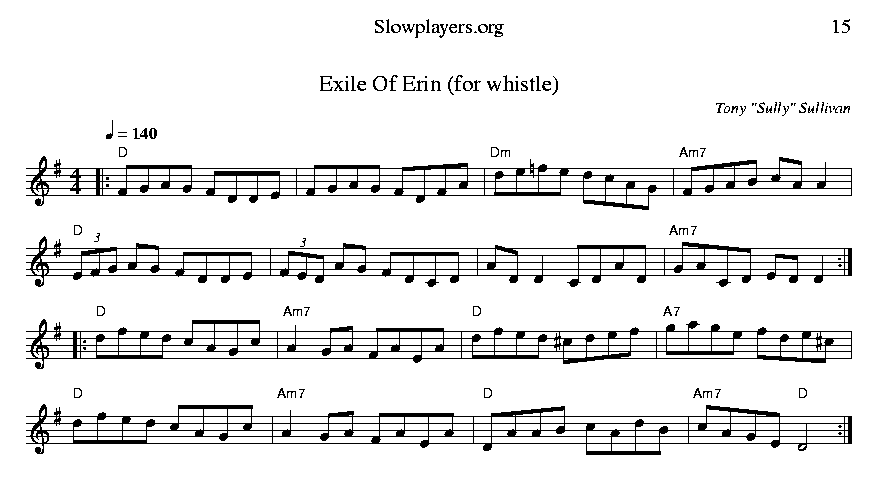 This article was posted in ABC format, Reel, Slow Session, Tune, Tune Comment. Bookmark the permalink. Follow comments with the RSS feed for this post.Post a Comment or leave a trackback: Trackback URL.