Also called “Boys of Sligo” this three-part reel is worth knowing, whether you like it or not, as it is played in many sessions.  It is a fairly simple tune, with lots of repeating phrases.  The third part is probably the trickiest of the three.  As such, the tune lends itself to variations, and there are many — e.g., compare Seamus Eagan’s version with the Abbey Céilí Band version.  It was written by Belfast flute and whistle player Olcan Masterson, who moved to Westport, co. Mayo, as a young man and is also an authority on both the geography and the history of western Ireland.  Masterson taught the tune to the flute player John Skelton in 1977, at an impromptu session during the All-Ireland Fleadh in Ennis.

John Skelton has been called “The English Garrison Keillor” by American newspapers and is surprisingly more famous for his work on the Green Linnet label with The House Band in the late 1980s through the 1990s than he is for playing the music of Brittany on the Bombarde. Importantly, “The Convenience Reel” was first recorded by Skelton with his previous band Shegui on Around the World for Sport (1980), where he gave it the title “The Convenience Reel.”  That title seems to have much to do with the circumstance of the session in which Masterson passed it on to Skelton.  As a “convenience” is a euphemism for that celebrated invention predictably but erroneously attributed to Thomas Crapper, the story is that the fateful session in Ennis was held one rainy day in or near a lavatory.  It became a “must-be-played” tune in the early and mid-1980s, where it was most often called “Convenience Reel,” as opposed to “Knock on the Door” or “Don’t Come In” or “Hey, This One’s Occupied!”  Now, as tastes change, since the 1990s there has been a growing interest in more complex tunes with unexpected changes — well, at least there’s an interest in saying there’s an interest in more complex tunes.  Consequently, this tune has lost some of its must-play status over the last few of decades, but will still show up often enough in sessions to be on a medium-sized list of, say, one hundred tunes.  By the way, it is #30 in Dave Mallinson’s 100 Essential Irish Session Tunes (2001). 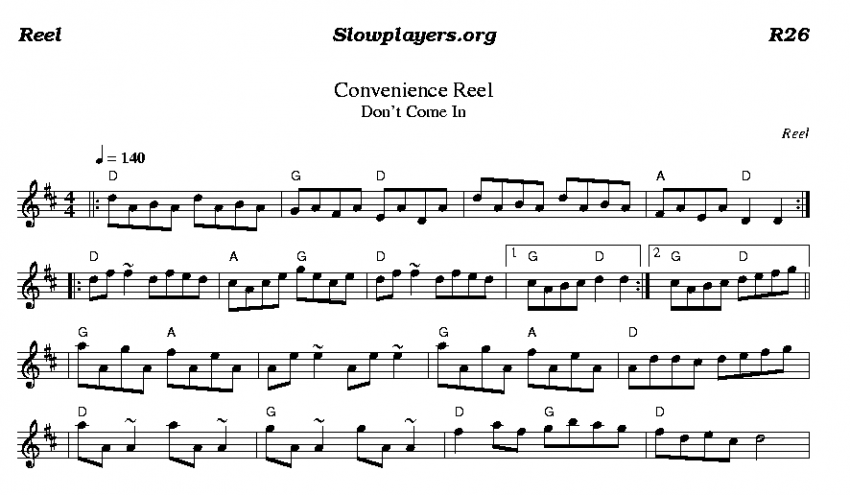 This article was posted in ABC format, Dots, MP3, Reel, Slow Session, Too Popular, Tune, Tune Comment. Bookmark the permalink. Follow comments with the RSS feed for this post.Post a Comment or leave a trackback: Trackback URL.