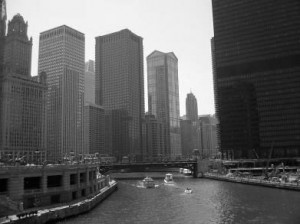 The “Chicago Reel” is tune #797 in O’Neill’s Dance Music of Ireland (1907), often just called “O’Neill’s 1001” since it has 1001 tunes in it. As it does not appear in O’Neill’s Music of Ireland (1903) – which is called “O’Neill’s 1850” since it has 1850 tunes in it – we can guess that between 1903 and 1907, when O’Neill was often collecting tunes from the Irish Music Club in Chicago, he picked up the tune from some undisclosed player.  There are many versions of this tune, and many settings: a setting is a version in a key/mode, and some players will try alternative keys/modes just to hear what results. As an aside, though often known as “the windy city” that appellation has nothing whatsoever to do with weather (even if admittedly apropos), and everything to do with the mercurial politics of the city.  Also, the name “Chicago” comes from the Algonquian word “sheka-koheki” which means “place of the wild onion” or more likely “stinky place.” This is because the current location of the city, at the southern tip of Lake Michigan, was once a hollow where wild onion and wild garlic grew in great abundance. As a result of the wonders of human progress, innovation, and industry this very same location now has a quite different stinky smell.

This article was posted in ABC format, MP3, Reel, Slow Session, Tune, Tune Comment. Bookmark the permalink. Follow comments with the RSS feed for this post.Post a Comment or leave a trackback: Trackback URL.