The jig “Calliope House” was composed in the open air by the English mandolin, banjo, and concertina player Dave Richardson (of The Boys of the Lough).  Originally in E,  this tune was thus outside the range of traditional flutes, whistles, and pipes.  It has since been transposed and is now in sessions most commonly played in D.  Though which part is called the “A part” is a continuing musical discussion.  In fact, I have been to a session where there were nearly equal numbers of those who habitually played the low part as the A part, and those who played the high part as the A part.  Once the tune got started, it went on for many, many rounds, since what some regarded as final part the others regarded as the penultimate part.  So the tune kept going around.  Unless everyone is pretty clear which part is which this tune can have a rather clumsy ending, so be aware how it starts! Anyway, Calliope is one of the daughters of Zeus the grand philanderer, and she is the muse of poets and musician.  However, that’s not the inspiration for the tune’s title.  Richardson wrote this, he explains,

on a sunny summer day in Edinburgh while sitting on a stone bench in my south-facing front garden which fronts onto the street. People were going to and fro to pick up their kids at the school opposite [the house]. I sat there to watch for my own daughter and see her over the street safely. To fill in the time, I played the mandolin.  Happy days!

is dedicated to [Mr. George Balderose,] a long-time friend of Cathal McConnell and The Boys of the Lough who owns a Victorian mansion in Pittsburgh where many concerts, parties and sessions have been held featuring traditional music of many styles. The house was dubbed ‘Calliope House’ when it became the home of a non-profit folk arts organization using the same name. This organization continues sponsoring folk music concerts and a folk music school in Pittsburgh under the name “Calliope: the Pittsburgh Folk Music Society.”

So that’s the story.  By the way, the Boys of the Lough play the high part first. 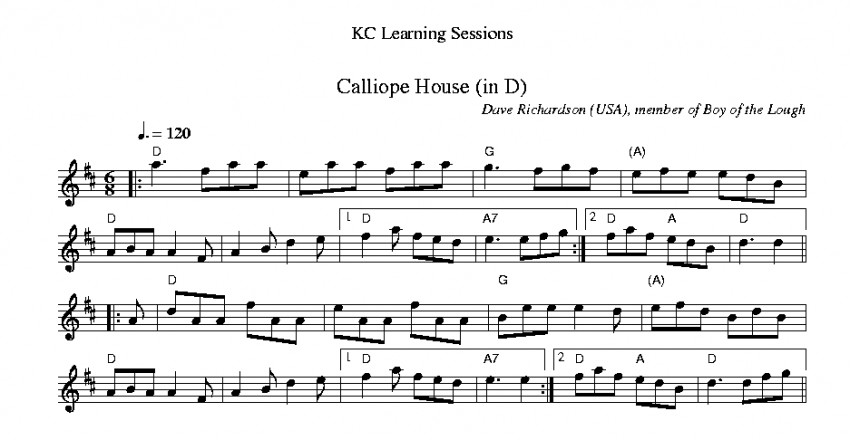