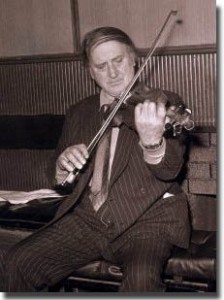 “The Bucks of Oranmore” is often  is just called “the Bucks,” and there’s an oft-repeated statement in county Clare, concerning changing things that should not be changed: “the bucks should not be interfered with” — this statement is attributed to John Kelly (1921-1988) commenting on someone’s unfamiliar setting of the bucks during a session.

If this tune seems challenging then take some advice often given for those just learning it: (1) learn it by ear from one particular recording – a young Matt Malloy and Donal Lunny have a mighty video of the bucks, and there’s another of it played by Liz Carroll, Charlie Lennon, Mairtin O’Connor & Dave Flynn (starting at 2:14); (2) break the tune up in your head and work on small bits of it at a time (this is what neuropsychologists call “chunking”); and (3) as there are many repeating phrases (for example, the last three parts end the same way), start slowly by chunking the repeating phrases in this tune.  This advice will take you a long way when dealing with wonderful tunes that you think are “too hard.”  Since, in fact, YOU ALREADY KNOW ALL THE NOTES, they can’t be too hard!  Play it as slowly as you need to keep the tempo steady.  Anyway, this tune is a very popular session tune globally, but no one thinks it’s played too much.  In Dingle the tune is almost always followed by the “Foxhunter’s Reel” (usually in A, but sometimes in G and THEN in A).

The Bucks of Oranmore, slow tempo

The Bucks of Oranmore, med tempo