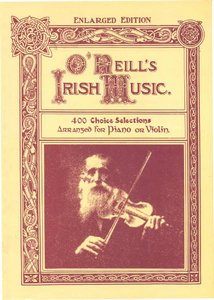 The march entitled “Brian Boru’s” is in jig time (6/8), and while its origin is unknown it dates to at least the 1840s, but could be considerably older.  There are accounts of various kinds of dances using this tune, and some seem fairly complex reaching a hey-day perhaps around the 1860s. Nonetheless, as a march it would be a cavalry march, as horses march clop-e-ty clop-e-ty (in 6/8 time), rather than hup-two-three-four (in 4/4 time), unless they’re standing on their hind legs, of course.  It is usually played in in Aaeol (Am) or Edor, and has from two to perhaps as many as six parts.  The one here is the three part version.  The most common two-part version just uses the first two of these three parts.  I might add the fourth part later since the two, three, and four part versions are most common — the four-part version is #1801 in O’Neill’s 1850 (1903), and #96 in O’Neill’s Irish Music (1915). 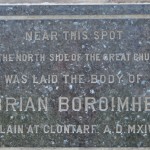 The tune is named after the historical figure Brian Boru (c. 941–1014 C. E.), who achieved the status as the first High King of Ireland around the year 1000, though he never did, in fact, have control of all other kings on the island.  The total population of Ireland at the time was around half a million, and there were an estimated 150 kings in control of various sized domains.  As legend has it, Brian Boru died on good Friday during the battle of Clontarf (23 April 1014).

In concerts before the turn of the twentieth century “Brian Boru’s March” would sometimes be played as a story-piece (like the multi-part “Foxhunter’s Reel”) in which the performer would provide a commentary on the scenes going on behind the music.  This kind of music & story entertainment was very popular, and would often be the high-point in a performance. The account given in a New York newspaper of Patrick Byrne (c. 1784-1863) playing a large house concert in 1860 caught Francis O’Neill’s eye, and he quotes it at large in his Irish Music: 400 tunes arranged for piano and violin (1915). 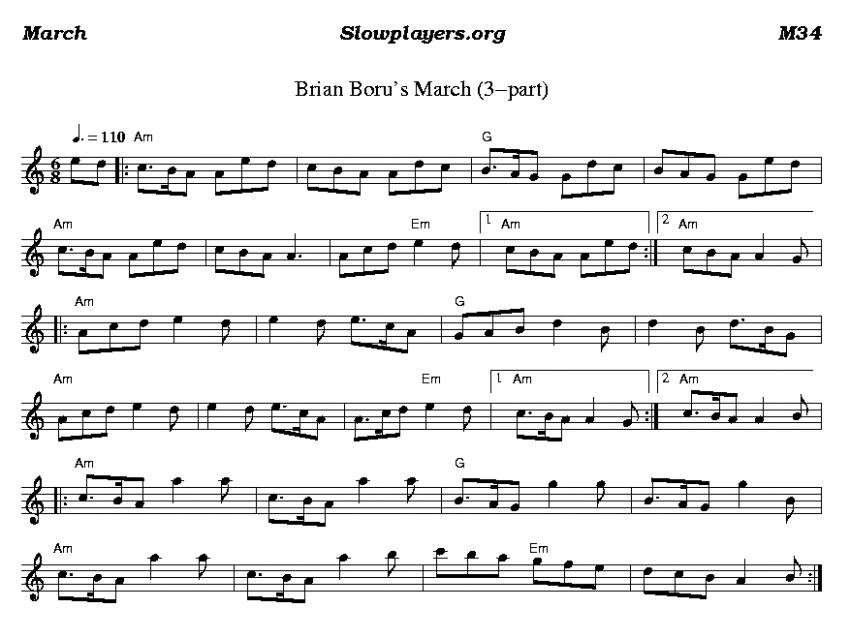 This article was posted in ABC format, Dots, March, MP3, Slow Session, Tune, Tune Comment. Bookmark the permalink. Follow comments with the RSS feed for this post.Post a Comment or leave a trackback: Trackback URL.