This reel is named for the Sligo piper Michael J. Anderson (1865-1947), who would eventually be called “Piper Anderson.” He was a flute player until he emigrated to the States as a teenager, where he learned to play and make the uilleann pipes.  His home, at 1459 Amsterdam Ave., New York City,  became a popular gathering place for Irish musicians in the city.  Anderson also ran a pub on the island where traditional Irish music was often played, so he quickly became well-established in the traditional Irish music community, and himself played the Hippodrome (O’Neill, Irish Minstrels and Musicians, 1913). He traveled back to Ireland in 1904 with five sets of pipes and the intention of reviving the piping tradition there, as the practice was a rare one in Ireland at that time.  However, he decided to move back to the New York in 1905, having met with too little success.  A contemporary of the renowned fiddlers Michael Coleman (1891-1945) and James Morrison (1891 – 1947), both also originally from County Sligo, he apparently taught them both some of the tunes they became well-known for playing. He traveled back to Sligo in the 1930s and in addition to teaching Tommy Hunt (1908-1994) to play the pipes, he also performed with Killavil, co. Sligo fiddler John Brennan.  He again moved back to New York, and stayed until 1946, when he returned to Ireland for the last time.

Those who learned this reel from the playing of Seamus Tansey play high part first, while everyone else plays it with the high part second.  Apparently, the Seamus Tansey version works best “when coming from a tune in ‘G'” (Tommy Walsh, Irish Tin Whistle Legends, 1989).  Noel Hill & Tony Linnane play the other way in the set “Anderson’s Reel / Carthy’s / Sweeney’s Dream” on their eponymous album Noel Hill & Tony Linnane (1979/2006). 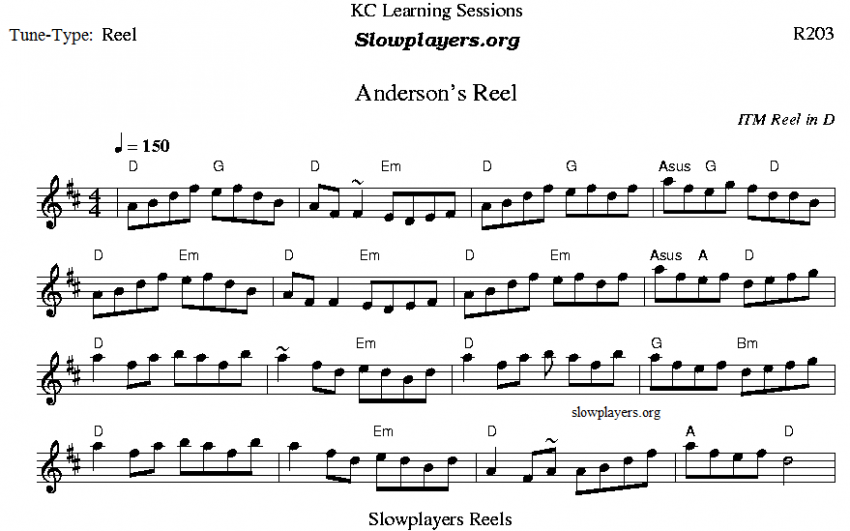