There is a view that the title of this reel was originally something like “The Jenny Damned the Weavers,” and that it concerns the way technology (i.e., a Jenny = an engine = machines) undermines traditional activity (e.g., weaving).  However, on Arty McGlynn’s CD McGynn’s Fancy (1994) Benedict Kiely writes that there are several tunes named after a certain “fair lady,” one Jenny. Though I think it highly unlikely, it is possible, of course, that all the Jenny tunes are named after the same person, as they could have been renamed around the same time and in the same area.  If so, then it would have had to have been a good while back.  Rev. Alexander Garden (1688-1778), a minister of Birse, Aberdeenshire, Scotland, is the supposed composer of this tune (according to Fiddler’s Companion). It was known in the States as far back as American colonies, probably as early as the mid-eighteenth century. Sir Alexander Boswell (1775-1822) put lyrics to the tune:

1st Verse
A’ Willie’s wedding on the green / The lassies, bonnie winches
Were a’ dress’d oot in aprons clean / And braw white Sundee mutches
Auld Maggie bade the lads tak’ tent / But Jock would no believe her
But soon the fool his folly kent / For Jenny dang the weaver

Patsy Touhey (1865-1923) plays it in a jig-reel set: “Fasten the leg in her (jig) > Jenny dang the weaver (reel).” It has been observed that there is some similarity between this tune and the Irish three-part setting called the “Longford Tinker.” It is popular among Cape Breton players, and is often heard at sessions.

Jenny Dang the Weaver, the dots 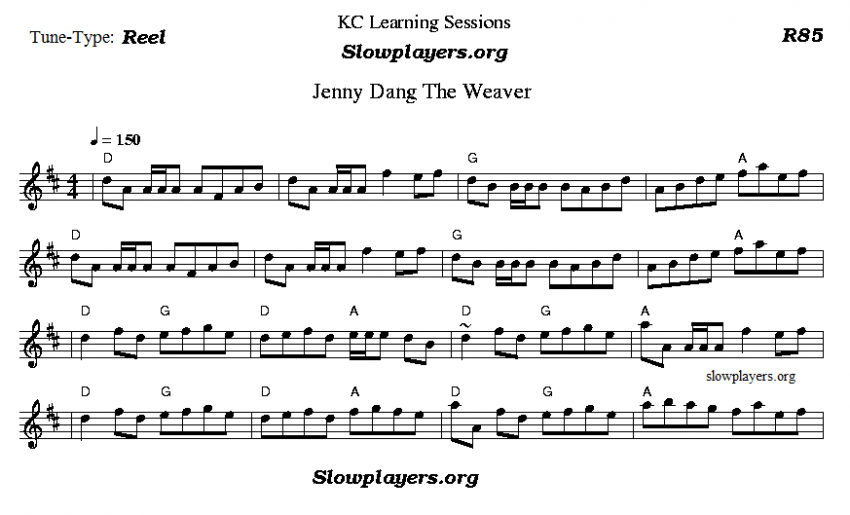