The Crooked Road to Dublin (G)

The reel “The Crooked Road to Dublin” is not a crooked tune, in fact it’s simply played ABAB.  Also just called “The Crooked Road,” it is a pretty popular session tune in many corners of the world, despite the fact that the world has no corners, the Flat Earth Society notwithstanding.  There were several recordings of this tune in the 1970s, including John McGreevy and Seamus Cooley on McGreevy & Cooley (1974) in a set with “The Moving Bog.”  Julia, John, and Billy Clifford have a version played with “The Clare Reel” on The Star of Munster Trio (1977), recorded between 1964 and 1976. On Paul Brady’s first solo album The (Missing) Liberty Tapes (1978), the set “Crooked Road to Dublin / Bucks of Oranmore” is track 9, and features Paul Brady, Donal Lunny, Matt Molloy, Andy Irvine, Liam O’Flynn,  Paddy Glackin, and Noel Hill. That recording shows that this is a pretty mighty 32-bar reel when it gets moving.  Martin Hayes has a roaring version on Under the Moon (2006). It was also on the Paul Brady & Andy McGann album It’s A Hard Road to Travel (1977) in a much more sedate form, something reminiscent of the way it was played earlier by several well-known players: Michael Coleman (1891-1945) on the fiddle, John Kelly (1912-1989) on the fiddle, Willie Clancy (1918-1973) on the pipes, John McGreevy (1919 – 1990) on the fiddle, and Seamus Cooley (1929-1997) on the flute.  It seems to have evolved from a Scottish pipe tune sometime after 1910.  The chords I’ve give are very simple (actually there’s just two chords), though there are many more options!

The Crooked Road to Dublin, the dots 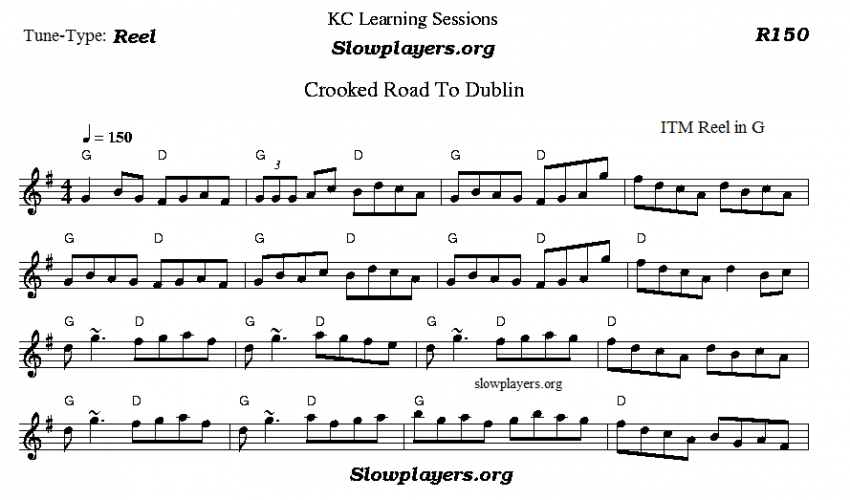