Firth of Clyde, Isle of Arran

“The Arran Boat” is in waltz time  here (3/4), but it might be notated differently elsewhere.  Played best as a slow air or waltz, depending on who’s playing it, it is an old traditional Scottish tune named for the isle of Arran, the largest island in the Firth of Clyde, Scotland.   The isle of Arran is very similar geographically and culturally to the Hebrides but the two are separated by the Kintyre peninsula, where Paul McCartney has a farm, and about which he wrote the song “Mull of Kintyre” (1977).

A Shetland listening piece, “The Arran Boat” is sometimes also known as a song, which uses this melody, called “Push Off, Push Off” or “Queen Mary’s Escape from Loch Leven Castle.” The lyrics for both refer to Mary, Queen of Scots and the event in which she was imprisoned in Loch Leven Castle from 1567 to1568, miscarried twins on 22 July 1568, and forced to abdicate as queen two days later.  She then escaped with the help of her gaoler’s family.  Sheet music for the tune is available online in the Lester Levy collection, under Queen Mary’s Escape. It is also in Helen Hopekirk’s Seventy Scottish Songs (1905) as “Push Off, Push Off.”  It is an old trad Scottish tune, but some people mistakenly think the title refers to the Irish Aran Islands — one of which is Inishmore, whereon you’ll find Dún Aonghasa fort — and so continue to spell it with one “r” and hence the confusion continues.  😉 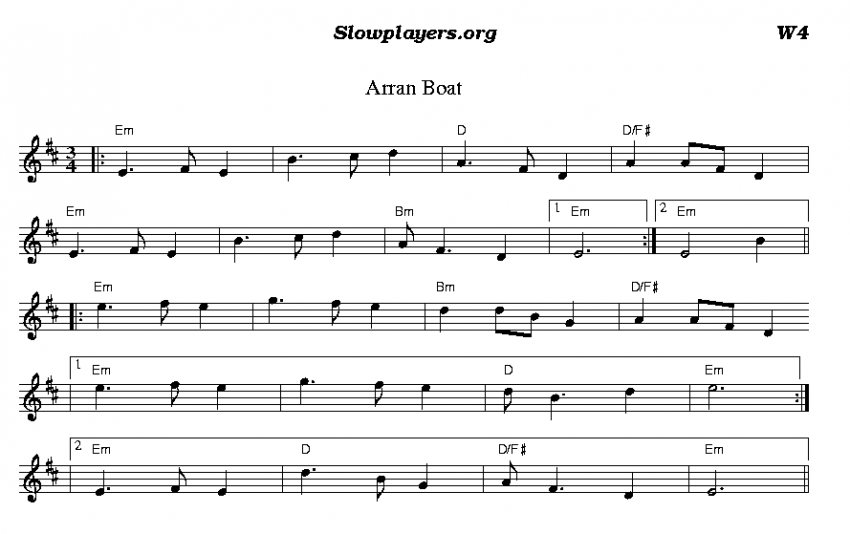 This article was posted in ABC format, Air, Dots, MP3, Slow Session, Tune, Tune Comment. Bookmark the permalink. Follow comments with the RSS feed for this post.Post a Comment or leave a trackback: Trackback URL.