“Bonaparte Crossing the Rhine” is a pretty common Ador hornpipe at Irish sessions in the US. Across the pond it’s played in Edor and called “Napoleon Crossing the Rhine.”  It’s also known as “Listowel Hornpipe” and “(Farewell) Sweet Killaloe” in areas of New England.  It has many other names as well, but most refer in some way to the allegedly petite Emperor who championed  the metric system, universal property rights, as well as heralded the nation-state.

Unfortunately, there are a number of other tunes which also share in some of these names, so beware of assuming a too close connection between titles and referents to avoid confusion.  For instance there’s an Old Time tune, prevalent on Youtube, called “Bonaparte Crossing the Rhine” that is in D, and has nothing in common with our tune.  On the other hand, a quick look at Andrew Kuntz’s site reveals that the Old Time tune “Bonaparte Crossing the Rocky Mountains” has the same A part and a very similar B part to our tune here.  However, it’s played as a breakdown (i.e., up tempo reel) — the vast majority of Old Time tune are reels or waltzes (as is also true in Bluegrass).  Also, it is presented in the key of C as it skips the sole F# in the second measure of the B-part.  However, it resolves on an A note and Am chord.  I’d argue the tune is actually still in Ador, it just doesn’t have a 6th scale degree. 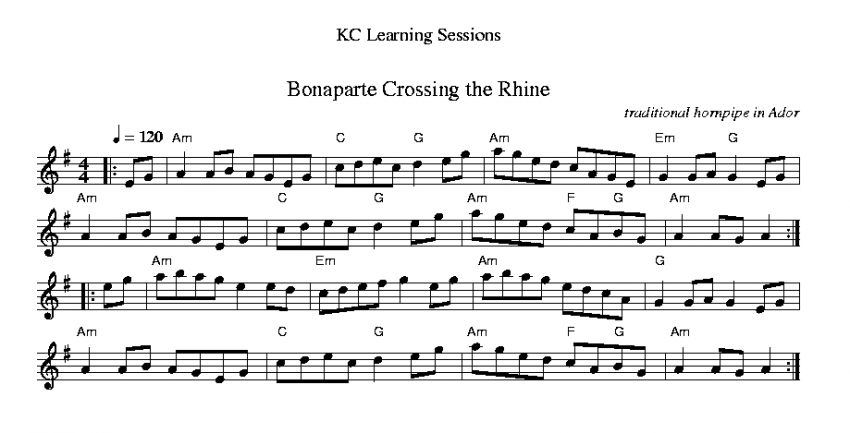