This reel, “Glass of Beer,” has a number of variations.  One of them, listed as “Pick Your Partner, 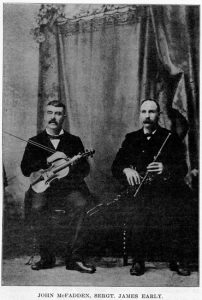 ” is #1391 in O’Neill’s 1850 (1903), and #635 in O’Neill’s 1001 (1907).   The idea that “Pick Your Partner” is a variant of “Glass of Beer,” or vice versa, is for many people a rather easy one, depending on the night.  Though often listed as “traditional,” some sources give authorship of this tune to the co. Mayo fiddler John McFadden (1847-1913). McFadden was born in Carrowmore.  His father and brother were also fiddler’s, and he was said to possess a celebrated ability to remember tunes in their original form, and come up with an array of variations.  He emigrated to Chicago, and as a contemporary of the renown Captain Francis O’Neill, McFadden was one of O’Neill’s sources. In addition to our tune here, McFadden is credited with composing “The Queen of the Fair” and some other dance tunes.  The Boys of the Lough have a reversed version in Eaeol called “Chase Her Through the Garden” on their album Live at Passim (1974).

Lastly, this is one of the tunes at the Whistle Shop’s Slow Session page. That page is still active, at least for now, but for over a decade the Bloomington, IL slow session hasn’t been. They have sheet music, and both a full-speed and a slow-tempo mp3s of the tune, on whistle.

This article was posted in ABC format, Dots, MP3, Reel, Slow Session, Tune Comment, Very Popular. Bookmark the permalink. Follow comments with the RSS feed for this post.Post a Comment or leave a trackback: Trackback URL.