The Frost Is All Over (D)

“The Frost Is All Over” has been an extremely popular tune for more than 400 years.  It has been around so long that it has many versions and many names.  Also, there are other tunes that will have (nearly) the same A-part or B-part, and if you find yourself among people who are from different sessions, this tune might result in disputation and declension.  Among the names are: “The American Dwa 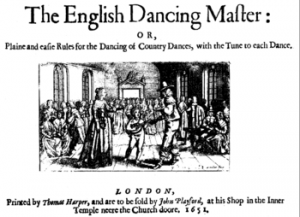 rf,” “Kitty Lie Over,” “Paddy’s Return,” “The Mist Of Clonmel,” “The Praties Are Dug,” “What Would You Do If You Married A Soldier?,” and “What Would I Do If The Kettle Boiled Over?”  It has similarities to parts of a jig played by the Kilfenora Céilí Band, which is given the exciting eponymous title “Kilfenora Jig #1.”  You can listen to an old 1930s recording of “Frost is All Over” at ITMA, track 3. It is also in Ryan’s Mammoth Collection (1883), as “Praties are Dug, and the Frost is All Over.”

Given the variety of versions/names, a few people attach a name to a particular version and get pretty testy when challenged.  That’ll be a local phenomenon, though.  Just nod thoughtfully if someone says you have it wrong. At any rate they are all pretty close, so as you work on it just remember that you’re learning several centuries-old tunes at the same time! We know this because a variation of this tune appears in the second supplement to The English Dancing Master, 7th edition (1688), by Henry Playford (1657 – c.1707) under the title “Hey to the Camp” – the “hey” here being a dance where two lines of people interweave while moving in opposite directions.  So, play this tune if you find yourself dancing to a camp.

Frost is All Over, (Sylvain Surcin)

Frost Is All Over