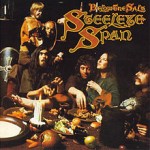 This jig, “The Bride’s Favorite,” is “Rogha Na Brídeoige” in Irish. Though once played often at weddings, it is now mostly played in sessions, but might be struck up if a wedding party happens to pass through the session space.  Now, according to the Fiddler’s Companion this three-part jig was composed by county Mayo fiddler John McGrath (1900-1955), who lived in America, and who is also credited with composing “The Providence” reel.  The titles of this tune and “Tansey’s Favourite” were reversed on the third track of the the Steeleye Span album Below the Salt. As a result there are some people who call each of these tunes by the other’s name.