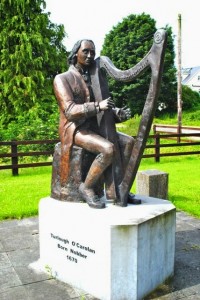 The title of this air, “Sí Beag, Sí Mór,” is sometimes incorrectly written “Sheebag, Sheemore,” “Si Bheag, Si Mor,” and other variations.  It is also given other titles I’ll not offer here.  The “Sí” in the Irish title designates a “fairy hill” or “fairy mound,” some magical swelling.  The word “beag” means “little” and “mhor” means “big.”  So the title means “little faerie hill, big faerie hill.”  Of course, the word beag” sounds very much like the English word “big,” though they are antonyms, which just goes to show that the English get things the wrong way ’round.

The tune was composed by the blind harpist Turloch O’Carolan (1670-1738), which is Toirdhealbhach Ó Cearbhalláin in Irish — and as typical of names in the past has various telling spellings.  As a young man Carolan first found favor at the house of his first patron, Squire George Reynolds of Lough Scur at Letterfain, Co. Leitrim (himself a harper and poet). It is said that Carolan was at this time only moderately skilled at the harp and the Squire advised him to direct his talents to composing, as he “might make a better fist of his tongue than his fingers.” It is likely this tune was Carolan’s first attempt at composition. His inspiration for this tune was a story told to him by Reyonolds about Si Bheag and Si Mhor, two ranges of hills near Lough Scur, that according to local lore were the seats of two groups of fairies of opposing disposition. 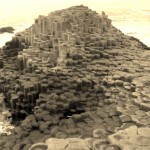 The groups engaged in a great battle, in which Finn McCool and his Fianna were defeated. Some versions of the legend claim the mounds were topped by ancient ruins, with fairy castles underneath where the heroes were entombed after the battle between the rivals.  Reynolds is supposed to have been much pleased by the  composition. The fairy mounds appear to have been ancient conical heaps of stones and earth called motes or raths (e.g., the Teltown Rath in Meath), actually prehistoric remnants of the earliest (i.e., pre-Celtic) inhabitants of Ireland.

While I provide chords for this tune, I almost always think it’s better for slow tunes like this to be played without accompaniment.  You’ll notice that the dots and the ABC are without chords. IMHO, the melody alone is usually sufficient.  Playing chords usually seems to take something away from the tune, rather than add to it.  Perhaps this is due to my narrow experience, though perhaps not. 😉

If you want the ABC for this tune, click Si Bheg Si Mhor (no chords)