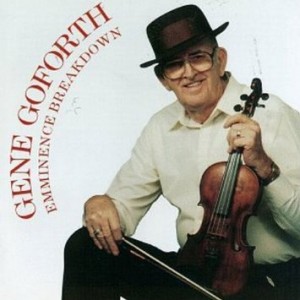 The reel “Merry Blacksmith” is a lively, popular tune in both the Irish tradition and in American old-time.  Though once known as “The Peeler’s Jacket,” it is not any more — unless one calls it “Peeler’s Jacket #1” and one is a supreme fan of the Fiddler’s Companion, which I am.  The tune is often played, though regardless of the name it might be thought to be an over-played at some Irish sessions.  As for it’s Americana version, it is a common old-time Missouri fiddle tune, where it is usually called “The Eminence Breakdown” (after the town of Eminence, Missouri), as this is what is was called by the Ozark fiddler & banjoista Roy Wolliver (1895-1964), the fiddlers Cecil Goforth (b. 1936) and Gene Goforth (1921-2002) both from Rolla, MO, as well as Gene’s student well-known student John Hartford (1937-2001) from St. Louis, MO — here’s a video on youtube of Gene and John playing together on an old-time tune called “Devil’s Hornpipe” from the CD Hamilton Iron Works (2001). However, it’s important to note that the old-time version “Eminence Breakdown” is crooked as played by Gene Goforth, while the Irish version is not. That is, on Gene Goforth’s CD Eminence Breakdown (1997) the title tune has two extra measures in the B part, so the tune comes out with sixteen measures in the A part and eighteen in the B part — though still played AABB the second measure of the A part is inserted as the third and eighth measure of the (ten measure) B part.

Our tune “Merry Blacksmith” is in what is often called “the book” by Irish musicians.  It is #1509 in Capt. Francis O’Neill’s 1850 (1903) — so-called because it has 1850 tunes in it — and also #728 in Capt. Francis O’Neill’s 1001 (1907)  — so-called because it has 1001 tunes in it.  Now, Francis O’Neill (1848-1936) had come to the states as a young boy of sixteen, and had worked a number of kinds of jobs before winding up in Edina, Missouri, as a school teacher in the late 1860’s.  As he was a musician and an avid attendant of local dances and music events, it is possible that O’Neill himself brought our tune here to Missouri.  In 1870 he and his wife visited Chicago, just before the Great Chicago Fire in 1871, and they returned every summer.  Though he had planned to return to teaching again in Edina in the fall of 1873, he applied and was accepted to join the Chicago police force, thereby giving up his teaching career.  He rose through the ranks, and became Captain Francis O’Neill in 1901.  An avid collector of Irish tunes, as well as Irish pipers — who he would hire to the police force — O’Neill was also a fan of traditional American tunes such as “Turkey in the Straw” (#739 in O’Neill’s 1001), including it in his collection on the basis of its “Irish antecedents.”

(1866–1942), a popular recording artist of the 78 RPM era.  His recording is on a compilation entitled Early Recordings of Irish Traditional Dance Music (1915).  More recently, the Kilfenora Céilí Band recorded it on Live in Lisdoonvarna (2002). There is, apparently, a four part version somewhere in musical space, but I have not located it.  It was first collected by Grattan Flood of Co. Wexford, who is the author of History of Irish Music (1905), in Ireland some time in the 1870s.  It (or at least some version of it) has remained a popular tune in sessions on both sides of the foam. The tune “Devils in Dublin” is a related reel, so probably not a good partner in a set.  It is also in Phil Rubenzer’s Midwestern Irish Session Tunes (2000).

Here’s the Merry Blacksmith in ABC