Hag in the churn (Ador) 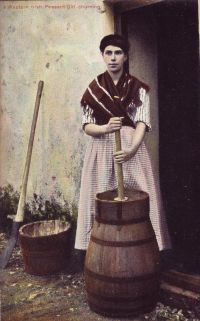 This jig is much more typically called “Hag at the Churn,” and is one of a number of “hag” tunes: “Hag with the Money,” “Hag in the Kiln,” “Hag at The Spinning Wheel,” “Hag’s Purse,” “Old Hag You Have Killed Me.” However, though today “hag” is a dysphemism for self-assured and unflappable women, in more magical times it referred to a treacherous, female hell-fire demon.  So, the title here refers not to the woman doing the churning, but to a magical creature. She was thought to have snuck into the butter churn stolen some of the butter, if there was less butter produced than expected; and she was thought to have snuck and played a prank if the butter didn’t congeal as expected.  Don’t take this from me. Here’s the Fiddler’s Companion version:

Caoimhin Mac Aoidh says a correct translation of the Irish title would be “Hag in the churn.” This refers, he maintains, to the folk superstition that witches would inhabit a churn to steal butter. They could not abide this particular tune, however, so it would be played as a ward when the chore of churning butter was done. It was a terrible and telling mark if a woman left the house during this ritual. (Andrew Kuntz)

So, if you were not a fan of the tune, you would have done best to endure it anyway!  This is tune #43 in Breandan Breathnach’s Ceol Rince Na hEireann, Vol. 2  (1969) but there given the un-title “Gan ainm” (no name).

If you want the ABC for this tune, click Hag in the Churn