Ger the Rigger (A)

This polka, “Ger the Rigger,” also known as “Jer The Rigger,” will have a soft “g” rather than a hard one.  It seems to be named for “Gerald,” “Gerry,” “Jerry,” or “Jeremiah” who was, we can assume, some sort of rigger of renown – that is, one who engages in cable hoisting on land or on sea. I had always heard the title said as if by a pirate, “Grr da rigg’r” and so sometimes forget the soft “g.”  It’s one of my faults, but I do try to not fall back on bad habits.  Anyway, this is a fairly recent Sliabh Luachra tune, usually played as a polka (e.g., by Jackie Daily, Denis Murphy, Kevin Burke, and Johnny O’Leary), but is sometimes played as a hornpipe (e.g. by Martin Hayes, and Connie O’Connell) or a barndance (e.g., by Matt Cranitch).  I have read, but not heard, that it is played as a single reel as well. It seems to date from the 1940s or 50s and is associated with the accordionist Thadelo Sullivan.  It is played in either A, Amix, or D and follows a standard AABB structure.

If you want the ABC, click Ger the Rigger

Ger the Rigger, the dots 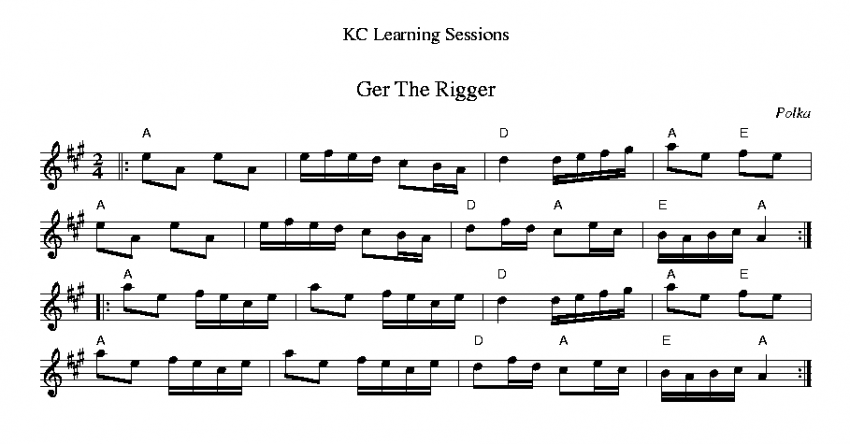