This reel, “Drunken Landlady” and called “Bean an Tí ar Meisce” in Irish, is clearly a version of “Pigeon on the Gate.”  The Bothy Band recorded this tune (in Ador) on their vinyl album Out of the Wind, Into the Sun (1976). The piper, singer, and folk-song collector Seamus Ennis (5 May 1919-5 October 1982) is often cited as the oldest source for this tune.  The Leitrim piper Néillidh (NAIL-ee) Mulligan (b. 1955) asserts that Ennis collected the tune in the 1940’s in Inishnee, which is a small island in Roundstone Bay near the village of Roundstone in Connemara, County Galway.  Later Ennis found that musicians in County Cavan commonly called it “The Drunken Landlady.” The tune was rarely played until the 1970’s when it was recorded commercially. It began appearing in print in the late 1980s. Breandan Breathnach mentions the tune “The Drunken Landlady” (though in the Ador setting) in his article on Seamus Ennis in Ceol V, 2 (1982), and reprinted in the collection of Breathnach’s writings The Man and  His Music (Dublin: Na Piobairi Uilleann, 1996).  Now, knowing the rather unbalanced gender-attitudes of the time, we might just reconsider the title and perhaps call it “The Unrestrained Landlady,” or even “The Comparatively Well-Irrigated Landlady.” 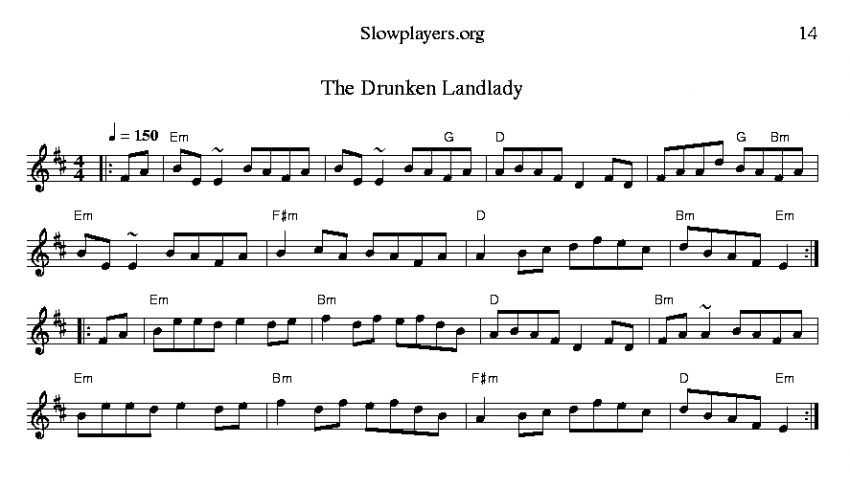 This article was posted in ABC format, Dots, Reel, Slow Session, Tune, Tune Comment. Bookmark the permalink. Follow comments with the RSS feed for this post.Post a Comment or leave a trackback: Trackback URL.