Just in case you were wondering, brandy is made from distilled wine, and so is in the “fruit of the vine” family of spirits.  This is why it’s not in the whiskey family, since whiskey is basically just beer without hops that’s been distilled.  While fermented grapes (the brandwijn) are the stuff of wine, any fruit can do in a pinch if it’s brandy you’re after.  The top shelf stuff is made from grapes picked at the peak of the season, and aged in oak barrels to give it a slightly sweet, smooth flavor.  The lower shelf stuff is made from grape skins rather than grapes, since they’re a whole lot cheaper, but the flavor is so harsh that it has to be aged longer in oak barrels to make it even palatable.  A brandy made from other kinds of fruit is better suited to the home kitchen brewer because most of them don’t have a spare oak barrel sitting around.  Apple brandy, peach brandy, plum brandy, and pear brandy are all fairly common, though you’ll not often (i.e., never) find kumquat brandy, Ackee brandy, rambutan brandy, or physalis brandy.  Note that though similar in their ingredients, brandy is different than cognac in that to qualify as a cognac the production methods have to meet particular legal requirements.  This is why you may hear someone say “every cognac is a brandy but not every brandy is a cognac.”

For the ABC in D click Drops of Brandy in D

For the ABC in G click Drops of Brandy in G

Drops of Brandy, the dots 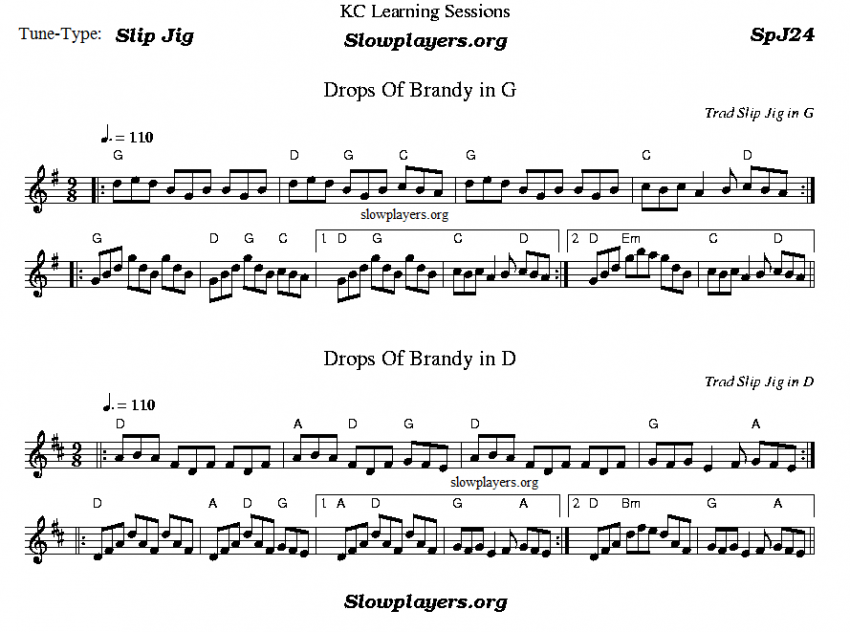