Sligo Maid (Ador) is a very popular session tune today, and according to Maddy Prior was always played during the many sessions in Irish pubs in London during the 1980s. It used to be called “The Sligo Maid’s Lament,” but has since been shortened to just “The Sligo Maid.” One can only lament for so long, after all.  Printed versions of this tune date to the 1920s, and it was one of Michael Coleman’s favorites to play. It is on the fourth track of the  East Clare fiddler and teacher Vincent Griffin’s album Traditional Fiddle Music from County Clare (1977) — he did make a second album (recorded in 2000) that was launched locally at Minogue’s Pub in Tulla, but is now available to the general public through Custy’s Traditional Music Shop. 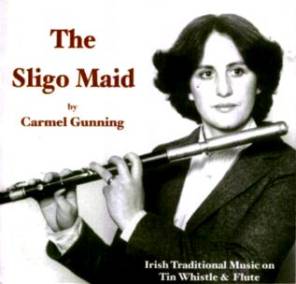 By the way, the respected and renown whistle and flute player Carmel Gunning, from Geevagh, South Co. Sligo, named her CD The Sligo Maid (2005), see the pic on the right.  Though it’s almost completely a whistle album, she holds a flute on the cover.  In 1999 she started a three day Annual Carmel Gunning International Summer School Festival which is just prior to the Fleadh Cheoil na hEireann in August in Sligo town. If you’re interested in the summer school contact Carmel Gunning at carmelgunn09@gmail.com

Now, as for the title of the tune, the Sligo maid in the title may have just been a young girl.  If not, a laundry and cleaning service in Sligo, a basic wash and dry, will cost about 8€; and house cleaning starts at around 16€ per hour. Undoubtedly, it would have been much less expensive in the 1920s.

As for accompaniment, the tune feels to me like it’s in Ador, but admittedly it skirts around.  As there’s no third scale degree in the A part (that is, a c note) one could start out playing an A major chord or an Am chord.  I prefer the Am, but others like the A major — for instance, L. E. McCullough in 121 Favorite Irish Session Tunes (Homespun, 1999) uses an A major throughout. In the version I know the third scale degree shows up in the penultimate measure of the B part, and I still like the Am rather than the A.  Others will disagree.  The choice is something you’ll have to deal with one way or the other.  I might advise accompanists to start out playing an A without a third (just the notes A and E) rather than an Am, so you can hear the way the tune plays up against its own Dorian setting.  That way you can make up your own mind, though you should definitely listen to what the melody players have to say as well.

There is also a song entitled “Sligo Maid” by Colm O’Donnell, an inventive land-bound farmer whose daughter’s CD, Siobhán O’Donnel’s “Beautiful Affair,” landed in my hands a few months ago, with great liner notes. She writes “I love the vibe of this song. It’s about a sailor who yearns to be back in Sligo with his loved one. This song is written by my father Colm O’Donnell, a farmer from South Sligo, not a sailor! He recorded his song on the album ‘Heart Strings’.” Unfortunately, though we live in an era of grand technology, you can’t find that CD anymore, but the tracks are listed here.  This song and the tune clearly have nothing in common, save the name.

If you want the ABC for this tune, click Sligo Maid 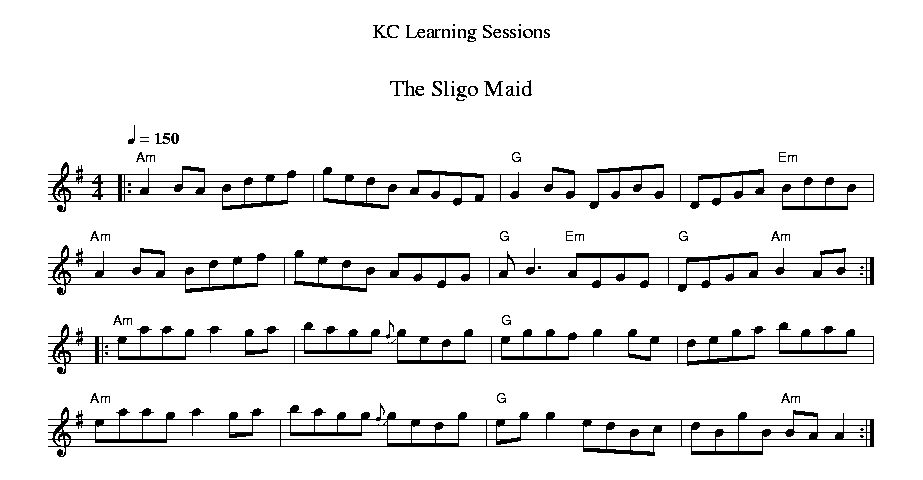