There is some confusion about the reel “Far From Home” (G).  Some say it was written in 1998, some say it is much older.  The latter are correct.  I know because the tune is #1261 in O’Neill’s 1850 (1903).  Some say the tune is from Shetland, while others deny it.  It does seem odd that a Shetland tune would be played in Chicago when O’Neill was collecting tunes in the 1890s.  Now, undoubtedly the tune sounds like a Shetland tune and is played in sessions in the Shetlands.  The tune was also recorded as part of a set of Shetland reels by the Boys of the Lough with the renowned “savior of Shetland’s musical heritage,” fiddler Tom Anderson (1910-1991), on the album Good Friends…Good Music (1977).  That seems to seal it. It’s a Shetland tune. However, among others, Nigel Gatherer, who runs the eponymous “Nigel Gatherer’s Traditional Music” website, denies that it is a Shetland tune, and mocks those who refer to it as “Far Frae Home.”  More support for this position is in Francis O’Neill’s Irish Folk Music (1910) where he writes

Except two tunes – “Far From Home,” a reel, and “Off to California,” a hornpipe, picked up in the San Joaquin Valley, California, in my nineteenth year, no Irish music was added to my repertory until I became a school teacher at Edina, Knox County, Missouri, where I attained my majority. (Irish Folk Music, 16)

So it’s not a Shetland tune.  Well, except that Francis O’Neill (1848-1936) was nineteen in 1867, and a recent book focuses on this time in his life – Chief O’Neill’s Sketchy Recollections, ed. Ellen Skerrett (Illinois: Northwestern UP, 2008).  In one of those sketchy recollections O’Neill writes “In the last of June, two flocks of about three thousand each were started for pasturage in the Sierra Nevada mountains, feeding as they went and traveling about five miles a day. At night, Bill Anderson, my partner, and I slept on opposite sides of the flock on the bare ground, etc.”  Then later he refers to his partner as “’Scotty’ Anderson.” So it is quite possible that O’Neill learned the tune from Scotty while they were herding, and that Scotty was a Scot and perhaps even a Shetland man.  If this is so, it seems the tune itself was quite far from home; and the tunes origin is still uncertain.

Anyway, this tune sounds best when played with a bit of swing at an easy tempo, rather than a fast tempo.  Some people call it “Patsy Hanley’s” or “The Windy Gap,” but they tend not to argue about it.  Everyone plays it AABB. 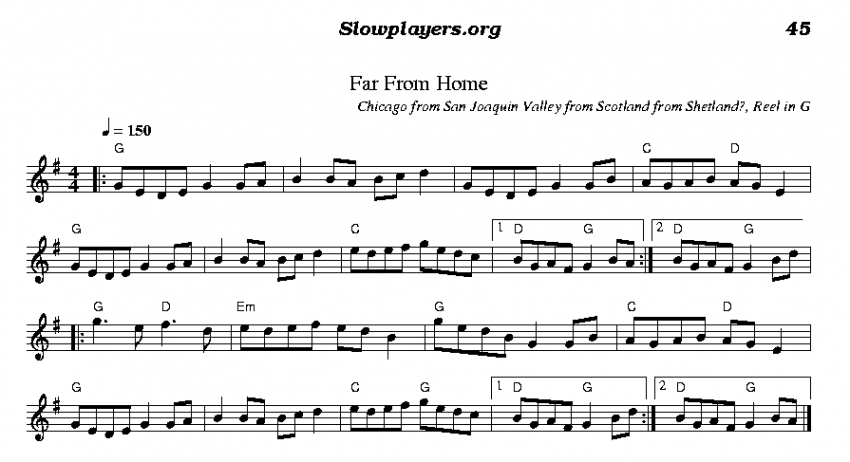