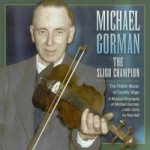 “The Mountain Road” is a reel composed by Michael Gorman (1895-1970), an Irish fiddler from County Sligo.  When he was young, his foster parents sent him for fiddle lessons to James Gannon (who taught Michael Coleman). Willie Clancy used to tell a story about a nine year old Gorman: “Gannon wrote out the tunes in his own system of notation on pieces of card. Slowly these cards piled up under Michael’s bed and he still could not hitch onto the fiddle. One day Gannon asked him to play ‘The Green Mountain.’ Of course he could not, and Gannon broke the fiddle across Michael’s head. He still has the scar.”  And FYI we will be instituting comparable pedagogical devices in our learning session soon, since it obviously must have made a significant impression. 😉

Later, Gorman formed a ceili band in Tubbercurry and later settled in London in 1939 where he worked on the railway. Although Michael Gorman played little in the 1940s, collectors Peter Kennedy and Ewan McColl gave him work. In 1953 his ceili band was featured by Alan Lomax on BBC, and he was introduced to the singer Margaret Barry. He gave up his job as a railway porter at Liverpool Street station and the two formed a soon-to-be-famous duo which held a residency in the Bedford Arms in Camden Town and lasted over many pub sessions and recordings until the singer returned to Ireland in the mid-60s. He was prominent in the Irish-music-in-exile scene in London in the 1950s and ’60s.  Ewan McColl brought Willie Clancy for a recording session with Gorman in 1955 in McColl’s Croydon home and the result was the album Irish Jigs, Reels and Hornpipes (1956). Anyway, this tune is apparently about an actual mountain road in Sligo (Gorman’s home county) that he enjoyed walking.  While there are many variations of this tune now, as originally composed it had six parts!  As the six parts are pretty similar, there are many variation possibilities based on Gorman’s original.  Kevin Burke plays a three part version, and most sessions just play a two part version (the first two parts).  The structure of this popular reel is ABAB.  It was issued in a 2 CD/book set titled Michael Gorman: The Sligo Champion (2001).  A recording of Gorman playing his versions is available online. 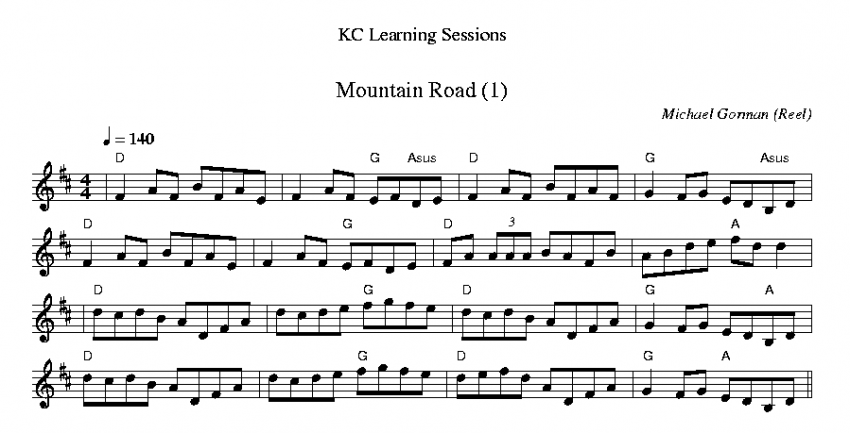