The hornpipe “Home Ruler” was composed in the 1960’s by the co. Antrim fiddler Frank McCollam. In sessions it is sometimes called “Home Rule” or “Daniel O’Connell, the Home Ruler” and thought to commend the belief in Irish Home Rule championed by, for example, Daniel O’Connell (1775-1847) and James Brown Armour (1841–1928).  You will also find that some websites where this tune is posted will display a picture of one or the other man.  This association is mostly due to the Chieftains album Boil the Breakfast Early (1979), where the tune is identified with the latter name and played first in a set of three called “Bealach An Doirín” (track 5) — that title could be translated as “Path Through the Wood” in English, or better “The Green Way.”  The album, which is usually just called “Chieftains 9” and marks the departure of Sean Potts (1930-2014) and Mick Tubridy (b. 1935), is their first with Matt Molloy, who in fact plays the tune a bit on the slow side, but with his typical panache. So, many people will tell you that the tune is about Home Rule or was originally dedicated to Daniel O’Connell. However, even though that may have been the Chieftains aim, as Dick Glasgow wrote in Irish Music Magazine (June, 2002) and North Antrim Music (June, 2011), “Frank in fact named the tune after his wife, Sally; and Frank’s daughter Catherine later confirmed this by telling me how all the men then, used to refer to their wives as ‘The Home Ruler’.”  The version here is pretty close to the one common at many sessions, but it’s slightly different in some ways than the original, which you can hear Dick Glasgow play on Soundcloud. When the two parts are reversed some people call the tune “The Hangman’s Noose.” That title is unfortunate since McCollum did compose another tune he actually called “The Hangman’s Noose,” which Dick Glasgow asserts is a reference to John MacNaghten (1722–1761), who is sometimes refered to as “Half-Hung MacNaghten” even though he was actually hung twice, in November and December 1761. You can also find a common version of “Home Ruler” in Phil Rubenzer’s Midwestern Irish Session Tunes (2000). 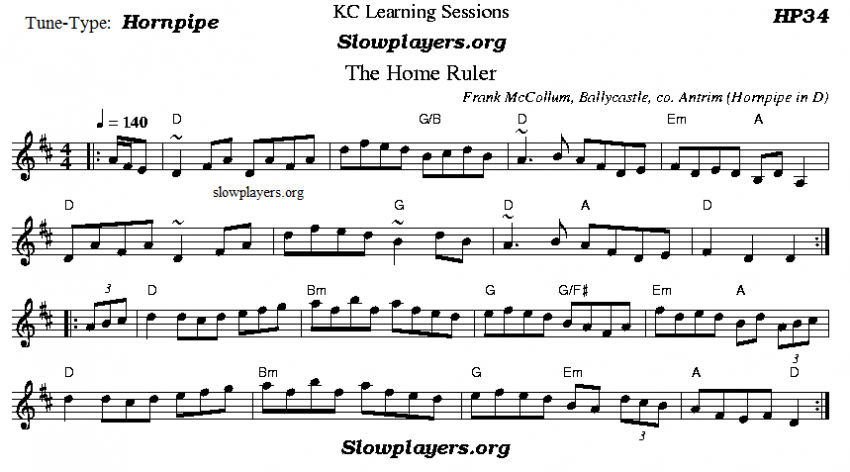